Quicker than I thought possible, given that they had to be developed from vintage film, the pictures from Sunday’s shoot have been developed and scanned. They have instantly proven to be the most interesting, artistic, and personally satisfying pictures I have ever had taken of me. Some were shot against a glass art installation on expired film, and turned out like something out of a 1920s science-fiction film, or a stroll through some surrealist painting. Here is a small selection of my favourites… 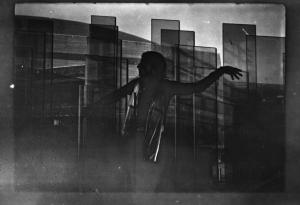 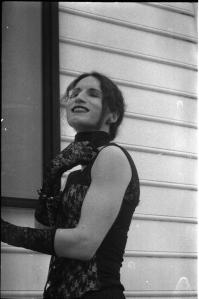 I swiftly worked to update all of my modelling portfolios in order to retire my “Anthony Burns” albums and replace them with my new images. My pride, unfortunately, was not universally shared, as http://www.onemodelplace.com/ rejected my attempt to revive my portfolio with them as Eleanor Burns. Possibly because they took issue with the quality of the vintage film, though I personally adore it, and would sooner shoot on that with all of its textures and randomness than the reliable hi-fidelity dreariness of digital media.

Or perhaps they merely did not want a nearly middle-aged transwoman as a model on their site. They didn’t stop to give their reasons, so one can only speculate. I do know I was lucky in obtaining a modelling offer, and will probably not be inundated with them in the future, but come what may nothing will make me regret Sunday’s shoot. I felt more alive, animated, and joyous than in years of shooting as a “man”, which never did anything to alleviate my gender dysphoria (In fact, long shoots in the presence of beautiful female models was a situation more calculated to excite my envy, so that was never a very well worked-out plan of mine).

Other useful lessons I learned from this experience:

1. If you intend to shoot with your back to the sun, wearing an underskirt might be a plan…

2. Makeup costs a fortune in every street store in Cardiff, even if you opt for the basic lines. However, there is a stall called “Andy’s Hair Hut” just within the St. Mary Street side of Cardiff Market (turn left straight through the arch) which sells lots of foundations, lipsticks, concealers, hair extensions, etc. at far better value than you will find in any of the national brand stores. As good a reason as any to support local business.

3. I live in a cool city, which is very happy to see people expressing itself (though on a sobering note, apparently I would not need to go far from its environs to be inundated with Victorian attitudes and hatecrime aplenty).

4. I love being Eleanor. I love being seen as Eleanor, called Eleanor, and seeing that name and image committed to film. I will never go back on that, selfish though it may be of me. Indeed, what could be more intrinsically selfish than discovering and celebrating one’s long-buried self? That certainly does not make it wrong, though…

The cine film is still to come, and perhaps even some more shoots. Since I have also learned that I need to wait just over a month to see the psychiatrist for the first time, I would certainly jump at the opportunity. I do not intend to spend that month pretending to be “Anthony” for one last time.

He’s dead. Can’t complain, had his chance and in modern parlance, blew it.

Quoted from “The Wicker Man” (1973), because one might as well end on Christopher Lee.

Merged with Coven Life "Witchcraft for the 21st Century"