Today commenced on what is fairly described as a low-key note, as in sifting through my spam on Facebook I came across the following stream of messages received over the last few months from a stranger…

However, the group to which she was “kind” enough to refer me – entitled “dirty freak eleanor antony burns” – is no longer visible, as when I told Cal about it, he immediately shared the information with his friends at AFP Patreon Patrons (Cal being a huge Amanda Palmer fan), who immediately responded by reporting the page en masse and posting a hundred-odd messages of support for us. For comparison, the hate group had two members… one of whom was its founder. Small fry, one might well say, but I feel it was worth playing the censor as the group had started targeting another trans friend of mine, it was using my pictures without permission, and all the love we have subsequently received from the AFP Patrons has completely restored my faith in humanity. 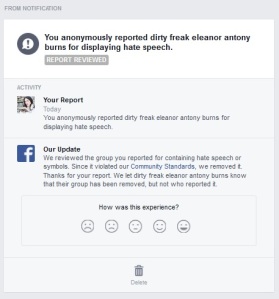 In other news, the film I have been shooting with Jason Marsh has finally been graced with a short trailer…

Editing on the existing reels continues, and hopefully we will have a first instalment soon. Knowing that my transition is likely to take a long time, perhaps even years, I suggested that we wrap the whole thing very soon, but Jason very adamantly said that he would like to continue to document the whole story, so “Imago” is likely to be a very long work in its final form. Hopefully quite a unique one, though, and certainly a fulfilling one for me. This freak is well supplied with supportive friends…

7 thoughts on “Love for the Freak”

(Merged with Coven Life) "Witchcraft for the 21st Century"