It was on the 8th of January 2015 that I began this blog, following the advice of my friend Jason, with no very clear idea but plenty of trepidation as to what might come out of it. Now seems as good a time as any to take stock of what I have learned and gained…

The Good – After a quiet start, interest and sympathy started to flow in, and rarely let up pace, from trans bloggers, from those in relationships with trans people, from non-binary activists, to supportive people in general. Particularly honourable mentions go to…

The Bad – Thankfully, little negativity has drifted this way, at least proportionally. Some critical feedback was drawn from Radical Feminists (a bit more on that later), and some downright hostile feedback from an older transperson who thought (and still thinks) me a charlatan, but not to name any names. The positives have vastly outweighed the negatives, and overall, the blog was a sound move that has helped me to keep a sense of purpose and progress, as I had dared hope that it might.

The Good – Initially, this went unexpectedly well. It was with great fear that I came out to a new GP in January, and they proved incredibly sympathetic, totally helpful, validating of my new identity, and not at all judgemental. Although they did warn me I would need patience…

In February, I saw a local psychiatrist with a view of obtaining a gender clinic referral. This too went not only smoothly but pleasantly, with no hostile questioning, no attempts to sow doubt, and complete consideration shown to my (by then) firmly established transgender identity. The referral was quickly processed, and I was (fairly) promptly informed that I was on the waiting list for the gender clinic.

The Bad – Progress for the past few months, alas, has been non-existent. This was expected. Worse, however, since the referral my permanent GP  (sadly, not the one I initially saw) has declined to help me at all. I have, like the majority of transwomen-in-waiting, ended up self-medicating with internet-bought hormones and androgen blockers. This is not supposed to happen, but the interim NHS guidelines for Gender Dysphoria, like the Pirates’ Code, are all too rarely followed, and I may be doing this for months (or years, even) to come. 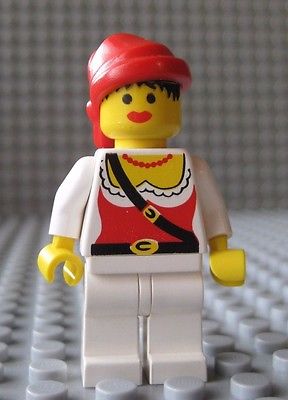 Disturbingly, I am in spite of this doing better than my husband Cal, who applied around the same time as me and still has yet to hear news of his referral. Also, we have by now encountered insensitivity from some GPs, and according to information Cal obtained from the gender clinic (which ran an informal workshop), many of the profession still do not see gender dysphoria as a genuine medical issue. Thankfully, the medical status of GD is still official NHS policy, but until we actually have our diagnoses we will continue, I fear, to fret over the outcome, and the possibility of policy changes that could leave us with no option at all.

The Good – I had a suspicion right from the beginning, even before I had any experience in the murky world of online transpolitics, that feminists might look askance at transpeople, though I had no idea back then of the whole Liberal / Radical divide. For someone who began the year with little academic knowledge of Feminism, I have learned a lot in the course of understanding this debate, but apologies if I err in the following…

At a very basic level, and as I understand it, Liberal Feminism (such as espoused very early in Mary Wollstonecraft’s Vindication of the Rights of Woman, 1792) holds the view that sexism in society arises from custom, tradition, and ignorance rather than by preconceived malice, and can thus be effectively fought through the reform of existing structures. Radical Feminism (such as pioneered by Second-Wave feminists like Andrea Dworkin in Woman Hating, 1974) by contrast holds that gender and patriarchy are deliberate tools of oppression, constructed with the full, misogynistic intention of keeping women as second-class citizens and an exploitable resource, and can thus only be effectively fought by the complete overhaul of the existing, corrupt social order.

Given that Radical Feminism posits an intentional campaign of hatred and control with the oppressor / oppressed rigidly delineated by biology (specifically, males conspiring to control and exploit females as unpaid labour, sexual slavery, and breeding stock), it naturally has very little scope to accommodate not only transwomen but any queer gender identities, finding them irrelevant at best, or at worst a malicious attempt by men to impinge on what rights and spaces women have obtained. This notwithstanding, there is no monolithic Radfem community or party line, and I have met those who tentatively accept transwomen as women, albeit with the (perfectly logical) caveat that they are not biologically female, even post-transition, and should be respectful that Radfem issues will often be specific to natal women. There are some transwomen even active and generally welcome within this community, although they qualify themselves as “allies” rather than as feminists per se.

Regarding the two schools of Feminism, I am still very much a learner. I have been fortunate enough to make friends in both quarters. However…

The Bad – I have, alas, read some strikingly inept journalism from trans Libfems including inappropriate comparisons between deficient trans rights and deliberate human rights atrocities, ironic attempts to shame confused allies for not being quite sensitive enough (in the journalist’s view), and accusations of really quite moderate, even reconciliationist feminists as “TERFs” (such as Helen Lewis and Penny White). This makes me hugely sceptical of the value of lending my weight, such as it is, to trans Liberal Feminism (or Liberal Transfeminism).

However, whilst there is no particular value in harping on with the “TERF” line (it is construed as an insult, and for me to disrespect anyone else’s chosen or rejected identification seems too ironic), I would strongly advise any transwoman to be very wary of most Radfem circles, even if invited to comment. If you do, expect hostility sooner or later, and do not expect to sway any perceptions or allay any scepticism, even if your intention is allyship. For everyone who appreciates such gestures of support, there will be others who construe them as patronising or hypocritical. I have had to watch two dear friends in the course of this year being slandered and grotesquely insulted in Radfem social media circles, one of whom was broadly sympathetic (at first) and one of whom was actually a long-standing ally (but has since disavowed that role). The hatred is there, make no mistake. As one of the commenters on the previously linked article by Penny White (who, incidentally, has always been very kind to me on Twitter) felt the need to put it…

“You should be listening to what WOMEN say, and not cowardly men who would rather claim womanhood and redefine the language we use for ourselves rather than break away from the patriarchal system they benefit from and embrace their gender non-conformity AS MEN. Trans “women” are not women, they are not female, they are not her or she, they are gender non-conforming men, and if they were brave enough to face that fact, they might actually be strong allies. Instead they’re men who reinforce harmful gender stereotypes, that help maintain the patriarchal oppression of women.”

Not for me to state my own courage, or lack of… but suffice it to say that this view is representative enough. Engage with these politics at your peril.

The Good – Our respective families, with understandable concern, have been quick to offer their support, and given that many transpeople face rejection, this is something to be hugely grateful for. Also, I feel easier in my conscience now, as the weight of my dishonesty all of these years is finally lifted, and has not been held against me. Cal’s family have also accepted me as their daughter-in-law, which is a tremendous relief. Any fears we might have had of being isolated as a couple, with only ourselves to rely upon, have been beautifully dispelled.

The Bad – Sadly, the timing of our coming-out did prove embarrassing enough that we were required to attend a family wedding as our old selves, in order to avoid a scene. Hashtag awkward… Thankfully, it is understood that this will not be happening again, whatever the occasion.

The Good – Rediscovering modelling was a joy this year, and one that helped me to raise my public confidence. The main project has been a short film (which is finally in post-production) called “Imago,” and when it eventually became necessary for me to do a shoot in “boy mode,” I felt so awkward and unnatural that it was wholly unnecessary to act up my melancholy for the scene… I am very pleased with the results, at least, so we shan’t be needing to revisit that concept. I also had studio and location shoots to rebuild my portfolio (having junked all of my male-model shots), and have shamelessly ripped off the most iconic trans editorial shot of 2015 (and probably of ever). Take a wild guess whose… 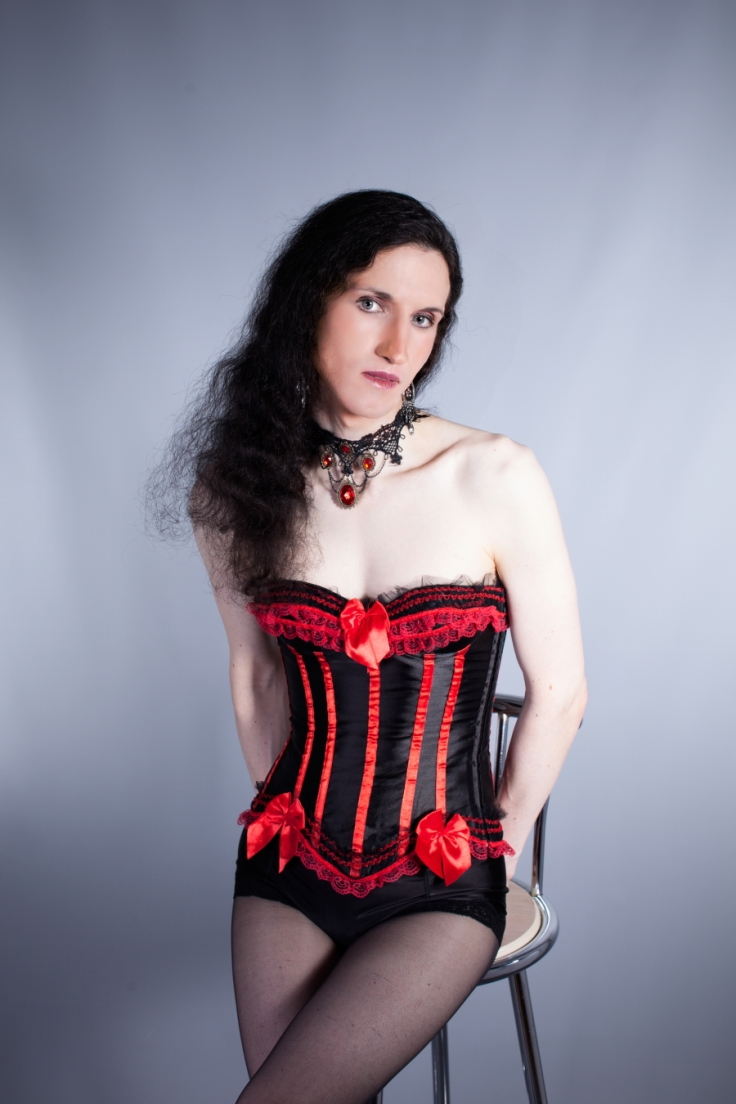 …although I wanted to Goth it up a whole lot more. The photographer (Alan) talked me out of that, his philosophy of plagiarism being to do it as faithfully as one can.

Coming out in work was unexpectedly easy. The Royal Mail policy has proven cast-iron to the extent that I have even been included on a women’s workplace development program. There has been no outspoken discrimination since (although I gather some unkind gossip).

Administrative changes proved easier than I dared to anticipate. I have now amended my NHS details, my bank details, changed my name by deed poll, changed my PhD certificate, and best of all obtained a new passport marked with an “F” in the gender box. I feel this part of transition is, to all practical intents and purposes, completed.

Also surprisingly, my church participation increased a lot this year with extremely positive outcomes, including my invitation to speak on being a trans Christian at Pride Cymru 2015 (at around the 13:50 mark for anyone wishing to hear my weird voice again…).

The Bad – Chavs making abusive comments on the street, white van men doing the same, misogynistic creeps messaging me on Facebook, elderly gentleman insisting on knowing my old name prior to lecturing me on why I am an ungodly rebel, the person who started the “dirty freak eleanor antony burns” Facebook group… oh, and electrolysis really hurts and I have many months of it to look forward to.

29 thoughts on “A Year of Existence”

Singing the praises of things that slip through the cultural cracks