“DIZZY AND THE RAVEN’S HEX”

My first full creation of the new year – another PC game, with a theme both retro and Wiccan … 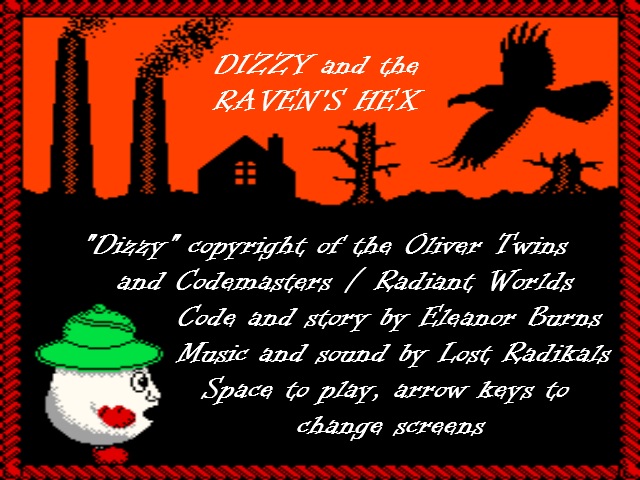 The Dizzy games were well known to 8-bit computer gamers in the late 80s and early 90s: a series of object-based puzzle platformers following the adventures of the eponymous Dizzy the egg as he solved mysteries, escaped dungeons, and rescued his friends and family in a tongue-in-cheek fairytale world. This is my attempt at a 3D version (compatible with fairly low-end PC hardware but not Mac, sadly).

The new factory town of Morgenholt, located deep within ancient fay woodlands, has recently been troubled by a mysterious and baleful haunting. Squire Whateley, leader of the town and owner of its factory, has sent for the most daring and resourceful hero in the kingdom to investigate and put an end to this menace. Which is where a certain familiar ovoid steps into the scene. Has boxing gloves, will travel …

Programming and graphics by me, soundtrack by Lost Radikals.

An ongoing, though somewhat less family-friendly project is my latest fanfic, this time combining the world of “Sapphire and Steel”, “Hellraiser”, and classic “Doctor Who”. Currently four chapters in (probably aiming for a total length of 5-6), this story features fairly graphic scenes of violence, mental manipulation, and pseudo-domination of beloved TV characters, in case anyone would prefer not to subject themselves to that …

The abduction of a journalist by ruthless extra-dimensional forces leads Sapphire and Steel back onto familiar territory. Meanwhile, deep within the Labyrinth, the Cenobite High Priest has a disturbing encounter of his own with an old wartime comrade, leading to a bizarre alliance. Can the operators find a way to successfully infiltrate Leviathan’s domain, sabotage this plan, and rescue the hostage before reality itself becomes a war casualty?